This is the official site for The Vibrators.

NEW LIVE ALBUM FROM THE BAND'S NEW YORK CITY DATE (DURING THE 2019 US TOUR) OUT NOW!

Featuring exclusive tracks by The Vandals, Down By Law, The Casualties, Reagan Youth, The Members, The Vibrators, MDC, Tsunami Bomb, The Queers and lots more!

Los Angeles, CA - The punk rock treat that tricked its way into the heart of fans everywhere in 2017, Punk Rock Halloween - Loud, Fast & Scary, returns with twice the number of tracks, twice the scares, and twice the fun! The 2CD set Punk Rock Halloween II - Louder, Faster & Scarier, is a double dose of Halloween themed songs both old and new featuring exclusive new recordings by suchlegendary punk bands as The Vandals, Down By Law, The Casualties, Reagan Youth, The Members, The Vibrators, MDC, Tsunami Bomb, The Queers and lots more! This is definitely an album of all KILLER, no filler highlighted by the first new Vandals track in 15 years, the rip roaring ÊCurse Of The Unripe Pumpkin,Ë The Casualties' aggressive take on The Ramones' classic ÊPet Sematary,Ë and Tsunami Bomb pulling off a spookily good version ofOingo Boingo's ÊDead Man's PartyË PLUS a once-in-a-lifetime collaboration between The Members and John Perry of The Only Ones on Bowie's ÊScary Monsters (And Super Creeps)!Ë As with all good Halloween treats, Punk Rock Halloween IIis available in both a KING SIZE 2CD version with all 28 tracks and a paired down FUN SIZE 16-track version on Halloween ORANGE colored vinyl and, of course, on all digital platforms.

DISC 1
1. The Vandals - Curse Of The Unripe Pumpkin
2. Down By Law - Buried Alive
3. Pulley - Grim Grinning Ghosts
4. The Queers - Down In The Shadows
5. Tsunami Bomb - Dead Man's Party
6. Reagan Youth - (It's A) Monster's Holiday
7. The Casualties - Pet Sematary
8. Amber Pacific - Calling All The Monsters
9. Ship Thieves - I Think Of Demons
10. The Members with John Perry of The Only Ones - Scary Monsters (And Super Creeps)
11. Black Valley Moon - Return Of The Ghost Of Johnny Ramone
12. The Vibrators - Wolfman Howl
13. Dave Smalley & The Bandoliers - Don't Fear TheReaper
14. Punchline - Ghostbusters 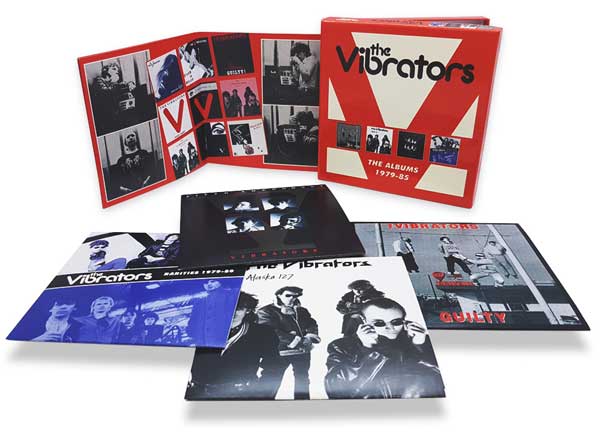 OLDER NEWS The band appeared on Sat. 26th May 2018 at Islington Assembly Hall, where for the very last time the band featured all original members and classic V2 line-up:
Knox, John Ellis, Eddie, Pat Collier and Gary Tibbs
alonside Phil Ram, Nick Peckham, and Pete and Nigel Bennett from the current line-up.
For German speakers: see pictures and a report for the show in Linz in Austria: here.
www.subtext.at
The Vibrators, Ralleluja und Trax 33 waren am Samstagabend zu Gast in der Linzer Stadtwerkstatt!

See an interview with Eddie and photos of the band at their recent gig in Furth, Germany, here.

BBC 6 Music's A-Z of PUNK podcast on BBC. The band were featured in this series. There are 25 episodes in which Marc Riley is joined by music journalist Rob Hughes to celebrate the pioneers, debunk the myths and identify the inspirations of the Punk movement.
More info: here. 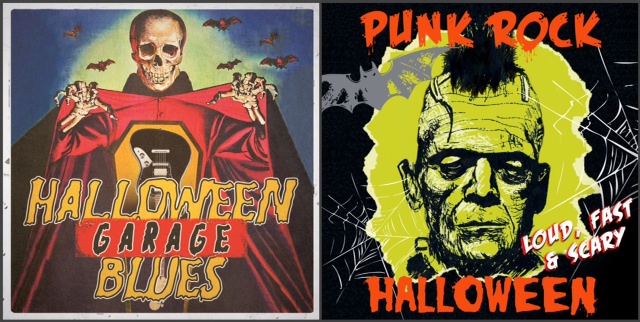 TWO NEW ALBUMS FROM CLEOPATRA RECORDS FOR HALLOWEEN. The second album has "Creatures Of The Night" from the band's recent album (see below) on it.
More info: here. 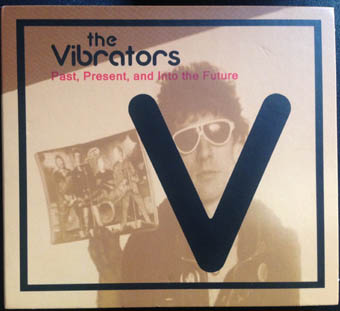 NEW ALBUM: "PAST, PRESENT, AND INTO THE FUTURE". This album features the recent line-up (Eddie, Darrell and Pete) as well as the V2 line-up (Knox, Eddie, John Ellis and Gary Tibbs). It's all new songs and was recorded at Pat Colliers studio (original bass player). 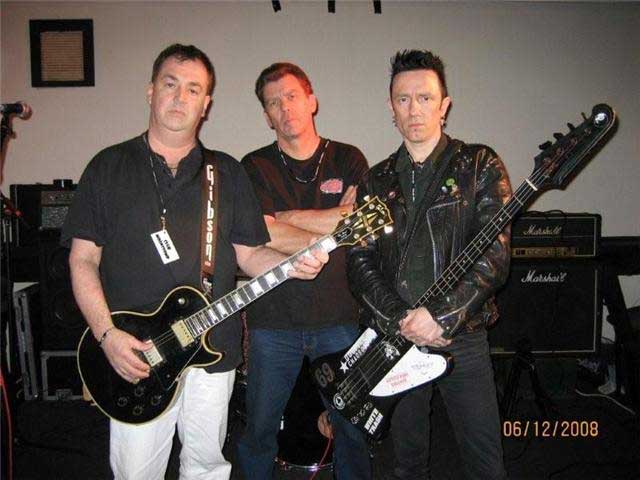 The Vibrators had their 40th(!!!!) Anniversary last year! 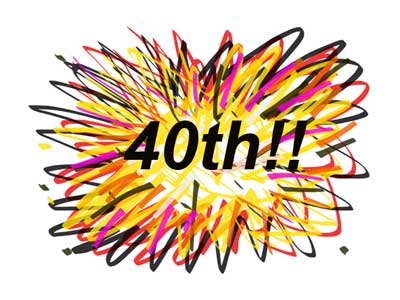 Check out this documentary and an old letter written by Eddie.

Sat. 27th Feb: - ISLINGTON, O2 - THE VIBRATORS' 40TH ANNIVERSARY SHOW!! - As well as the current line-up this also featured the two original line-ups of the band, so appearing were Knox, John Ellis, Pat Collier and Gary Tibbs! It was absolutely not to be missed!! (Note: this is the only time any of these original band members will be appearing.)

NEW ALBUM - "PUNK MANIA - Back to the Roots" was released on 16 Sept. in USA on Cleopatra Records. Will be coming out soon in UK on Captain Oi! (Read Cleopatra press release on www.broadwayworld.com here)

The Vibrators are in the top '26 Huge Autumn Tours to Get Excited About' in NME, see it: here.

Interview with Knox talking about The Vibrators in Record Collector magazine, (out last August, it has Kate Bush on the cover, excerpt here : http://recordcollectormag.com/articles/hard-knox-life ) 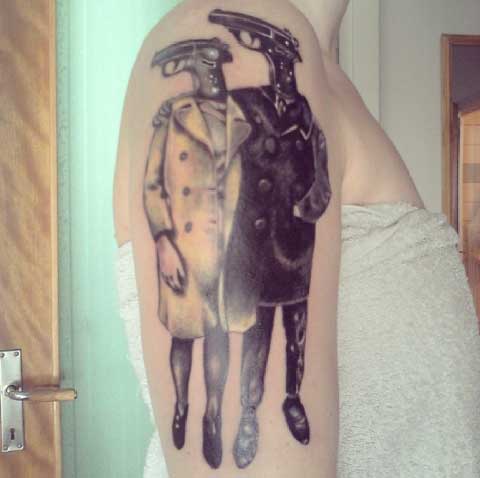 Check out this great "Automatic Lover" tattoo that Evelinn in Sweden has had done!!. Original artwork was by John Ellis. 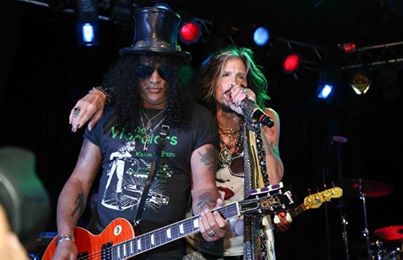 NEWS: Slash was wearing a Vibrators "Whips and Furs" T-shirt when he guested with Aerosmith a few months ago at the Whiskey A Go-Go. See video here. (There's more videos of this on YouTube.)

The band were recently in Pat Collier's (Perry Vale) studio and recorded a new album. No title yet, or release date, but it will be coming out on Captain Oi! in the UK, and West Coast label Cleopatra Records in the USA, featuring a different mix.

Interview with Eddie and Knox in "Fear and Loathing LB"

Good interview with Knox from The Vibrators - see it here!

Check out this great video on YouTube! - It's The Vibrators' song "X-Files" and the video was made by SimplePsiBin. He's done a really really great job. See it here: http://www.youtube.com/watch?v=2rZO9dDuR8Q 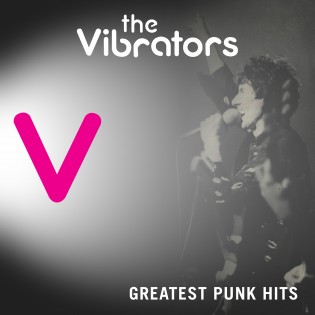 LATEST STUDIO ALBUM "ON THE GUEST LIST" - (released on May 7th, 2013), with a single "Slow Death" (Flaming Groovies' song) released in June 2013, on West Coast USA label Cleopatra Records (www.cleorecs.com). The album has been getting good reviews! 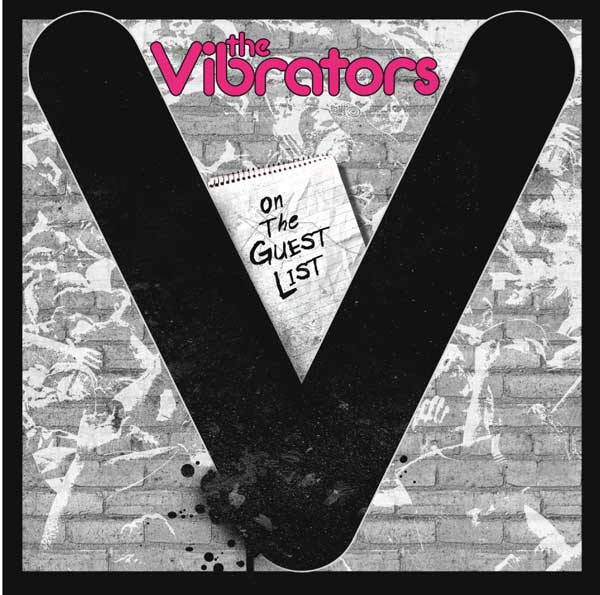 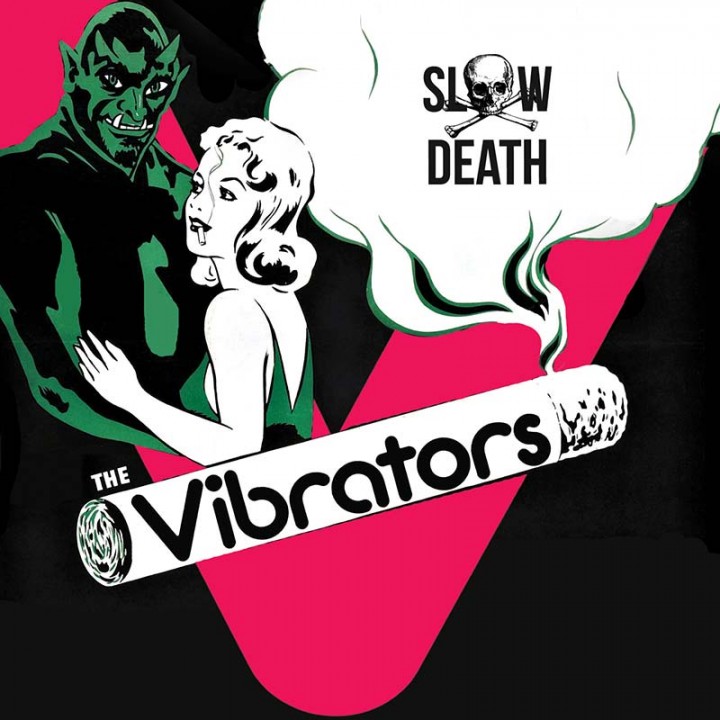 Nigel Bennett, one of the main Vibrators' guitarists, who recently left the band to go solo, has a video out, see it here: http://www.youtube.com/watch?v=xx-frwL7Iu0&feature=youtu.be
Nigel's website is here www.nigelbennett-music.com.

Pic of band from years' ago: 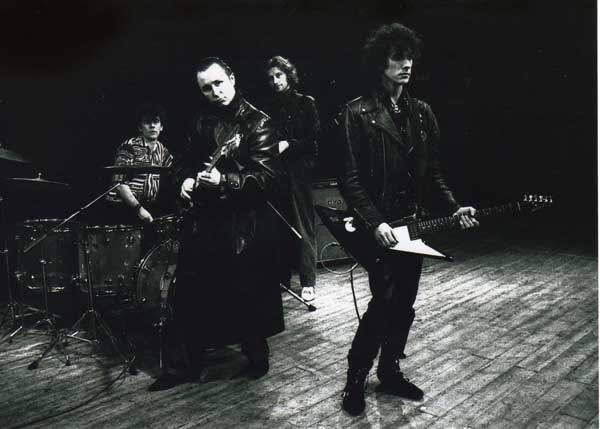 Photo of the band, c1983, during the making of the "Baby Blue Eyes" video . (Pic by Mick Mercer - he's got several photos for sale on eBay.) 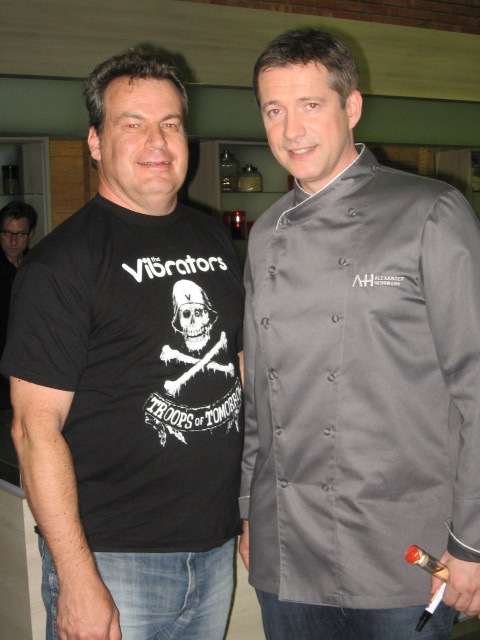 VIBRATORS' T-SHIRT ON GERMAN TV: Our fan Oliver - "Are you aware that the Vibrators had an "ad" on Germany TV ? I was in a cooking show with star cooks and took the chance to "present" my VIBRATORS t-Shirt, see photo. The cook with me in the photo is Alexander Herrmann, a star cook."

NEW STUDIO ALBUM: The band went into Pat Collier's studio in March this year and began recording a new studio album. This will have guest singers on it, and is for US label Cleopatra Records. (Pat Collier was the band's original bass player, and has Perry Vale Studios, a guitar band orientated studio in South London.)

Check out this great thing beebee333 has made of Vibrators' song "The Streets of London Tonight": http://www.youtube.com/watch?v=Bf0aWcHKkn4 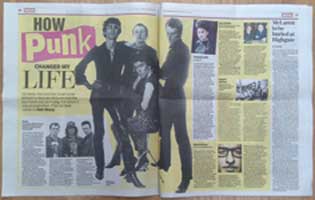 THE BAND WERE FEATURED IN THE INDEPENDENT - The band were in Sat. 10 April 2010 Independent. (Click on image to see larger version.) 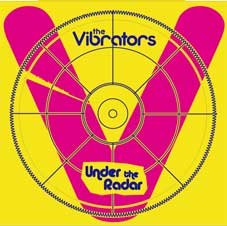 BAND'S LAST STUDIO ALBUM "UNDER THE RADAR" - The band recorded this studio album in original Vibrators' bass player's Pat Collier's studio (Perry Vale Studios, south London) in 2009. The album, containing 14 new songs, was titled 'UNDER THE RADAR', and was released by Captain OI! Records on 30th November 2009. The band are playing songs from this album at gigs. We have copies of this for sale at gigs or see our merch page.
Good reviews of album in: vivelepunk.com and Mass Movement Magazine. 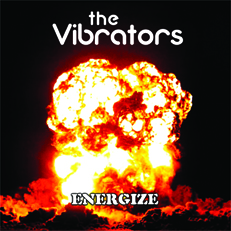 "ENERGIZE" album - re-released on vinyl in Czech, on PH Records, We have them for sale so either get one at a gig or see our merch page.
(If you read Czech - here are 10 or more reviews of this album plus the Under The Radar album - see above - plus radio station playing our songs - here.)

VIBRATORS' "TROOPS OF TOMORROW" SKATEBOARDS - here is the hot design, by 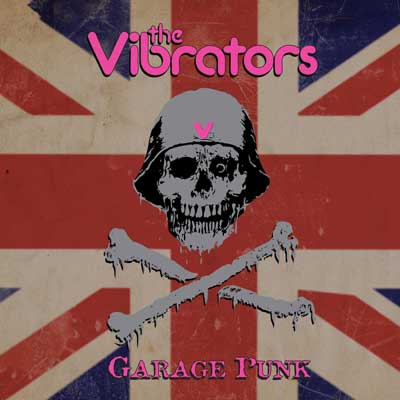 VIBRATORS' OTHER ALBUM RELEASE IN 2009: "GARAGE PUNK" is a '60s garage cover's album recorded at Pat Collier's studio (Perry Vale Studio). It was released on 30th June on Cleopatra Records. Pat Collier was the band's original bass player. The album is in CD and vinyl formats, and tracks include "Psychotic Reaction", "Pushing Too Hard", "Have Love Will Travel", plus many more. We have them for sale at gigs or see our merch page. 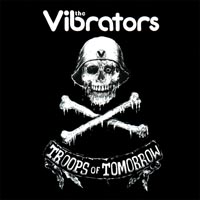 7' SINGLE - "TROOPS OF TOMORROW" also out on Cleopatra Records.

FAIRLY RECENT ADDITION - all the lyrics to the "ENERGIZE" album here. 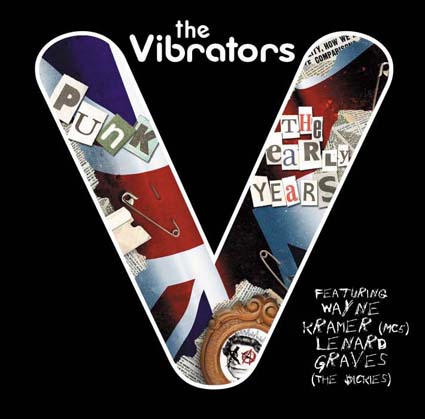 OTHER NEWS: The Vibrators' LIVE ENERGISE CBGB's 2005 DVD is now distibuted in Japan by MOVIENET INTERNATIONAL. which is a big music DVD distributor.

OLD PHOTOS: If you want to see what the band looked like years ago (1982) it's well worth checking out Ian Turner's brilliant photos at: www.2brilliant.net/photos/puremania, and don't we look young. 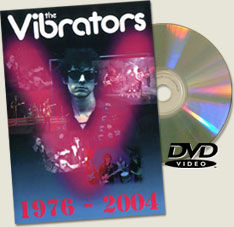 A must for all Vibrators' fans! On Cherry Red. 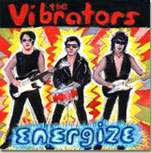 "ENERGIZE" - OUR FIFTEENTH (COUNT 'EM!) STUDIO ALBUM, CAME OUT IN AUGUST 2002, ON TRACK RECORDS.
We finished making this studio album (our fifteenth) in the autumn 2001, with Pat Collier (original bass player) producing. The album has sixteen new songs on it, and has John Ellis (the original Vibrators' guitarist) playing on two tracks (X-Files and 3/4 Angelina). Knox thinks this might be the band's best album since Pure Mania and V2.
List of tracks: "X-Files", "Your Love Is Fading Away", "So Far Down", "Animals," "Shine", "3/4 Angelina", "Rock The Kids", "New Brain", "Band New", "General Purpose", "Jukebox Light", "Tears Are Falling", "Moonlight", "I Knew It Must Be Love", "2nite", "No More".

V2 - the band's 2nd album, originally released in 1978 on Epic - we now have copies of this for sale (see our merchandising page or punkrockshop.co.uk).